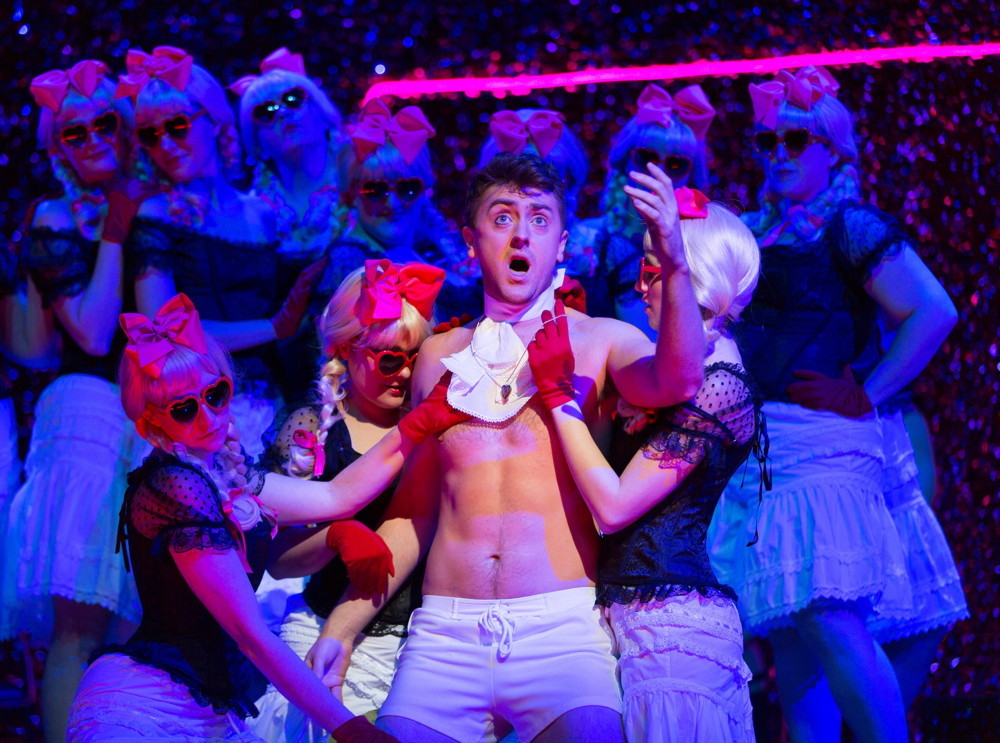 On a night where Stravinsky’s music was to take the stage in Boston Lyric Opera’s new production of the his opera The Rake’s Progress at the Emerson/Cutler Majestic Theater, there was additional anticipation for the character of the composer himself to appear as part of the production. He was mannered, intensely self-absorbed and as performed by Yury Yanowsky.(former Boston Balett principal and movement director for this production) he bore an uncanny likeness through his “embodiment” of the compositional genius as he stalked the stage.

In this tale of making a pact with the devil, taken from 18th century English artist Hogarth’s series of paintings depicting theallegory of a young man’s fall into debauchery, Stravinsky’s score and W.H. Auden and Chester Kallman’s libretto (shown viasurtitles) was delivered, in force but intimately by the two leading performers. Making his BLO debut, tenor Ben Bliss (2016recipient of the Lincoln Center’s Martin E. Segal Emerging Artist award from the Metropolitan Opera) gifted with a resonantvoice, exuded a youthful and convincing portrayal of Tom Rakewell, mastering a handsome masculine presence while bringingan element of humanity to the role. Matched equally by a powerful and soaring voice was soprano Anya Matanovic (Violetta inBLO’s 2014 La Traviata) playing his betrothed, Anne Trulove. Ms. Matanovic provided an emotional performance of love andstrength, hitting all the high notes until the last act (literally and figuratively), until Tom’s final fall into insanity. Matanovic alwaysremained dramatically tender as the forsaken fiancée. Kevin Burdette emerges as a surprisingly exuberant version of NickShadow (the devil himself) by playing the character part game show host/part evil incarnate, and always owning the stage withphysical delivery of his portending lines with wonderfully exaggerated body language.

Baba the Turk, an amorous distraction and eventual wife of Tom’s, was played by Heather Johnson, (portraying the title role inBLO’s 2013 production of Lizzie Borden) with convincing bursts of emotion and possessive desires in soaring operatic calls toTom, as Anne pleads for him to come back to her and their planned life together. Internationally-recognized dramatic sopranoJane Eglen plays the larger-than-life Mother Goose, brothel owner, and vehicle for Tom’s first stray away from Anne. Herpersona and voice dazzles with the support of spectacularly glitzy show biz costuming, and flirtatious on-stage presence.

Stravinsky’s score for The Rake’s Progressis carried in full, surrounding force and exactingly delivered by conductor DavidAngus and an impressive 39-piece orchestra, resulting in a powerful synthesis of melodic score and vibrant storytelling. Stagedirector Allegra Libonati drives the superficial “window-dressing” of all trick and no treat in her effective staging of this tale ofreckoning fate. The final act—set in an asylum—with an effervescent yellow lighting effect, exposing the stage’s back brick wallcreates an enclosed space of which there is no escape for the forsaken Tom Rakewell.Julia Noulin-Mérat as the scenic designer delivers an eye-catchingly bright, glaring, visually sharp set as an anchor for bothleads to play up against in this contemporary update to Hogarth’s parable. As the audience is taken from an idyllic and securecountry setting with a surreal window view of blue sky, to the haunts of London, with dark black curtains that sparkle asbackdrops that set a perfect mood leading to seduction scenes of carnal pleasures at the Mother Goose brothel, to the all-goldbathroom with enormous golden bathtub where Tom is slowly drowning in champagne, excess and falling further prey to NickShadow’s intentions.John Conklin, an internationally-recognized set designer, and Boston-based Neil Fortin are co-costume designers anddeserving of high praise for creating a shimmering “old Hollywood feel” for all characters, helping carry the contemporarystoryline theme of Tom Rakewell’s entrapment with society’s obsession for riches. A shimmering parade of garish clothing, and clothing changes occur for lead performers and staged groups, which adorn carnival–like masks and matching attire support the status, wealth and the celebrity of Tom’s image.

As the moment of frailty in human character takes the audience to a conclusion in the final act, with Tom Rakewell finally quiteinsane on the floor of the asylum, and unable even to recognize his own dear and true love Anne, this production takes on ahuman poignant direction—the cast turns to us in our seats and asks if Tom is in the nature of all us. As stated with affect by Ms.Libonati, Stravinsky’s The Rakes Progressis ultimately a personal statement by the composer but in this splendid production,with the composer’s “embodiment” on stage, we, the audience, cannot only be voyeurs, but must participate “in a dream,where we cannot control the visions of our subconscious.”