Monk: A Legacy of influence both past and present - ArtSparksMusic
Skip to content 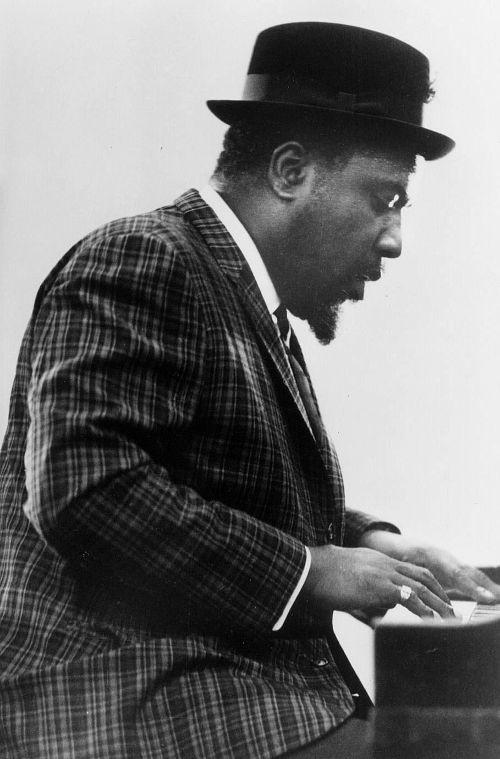 If legendary jazz musicians were collected together in one giant jigsaw puzzle and each musician was one piece – Thelonious Monk’s individual piece would be impossible to cut out. As a singular artist, his shape or place in jazz is too uniquely non-conforming.

From a musical and historical standpoint, he is recognized as one of the first creators of modern jazz and a major influence on the later development of the Bebop movement. He influenced all its key players, along with helping mentor both John Coltrane and Sonny Rollins in his 1950’s quartet arrangements.

An innate innovator and inventor not only in the unorthodox style of his technique and playing but in particular, his actions on the piano keyboard as well. According to Bebop: The Music and Its Players author Thomas Owens, “Monk’s usual piano touch was harsh and percussive, even in ballads. He often attacked the keyboard anew for each note, rather than striving for any semblance of legato”

His compositions and interconnected improvisations, coupled with his technique, establish a genius expressed by many of his peers, jazz critics and music historians.  In addition, many current jazz musicians and composers, particularly Jon Batiste, Ethan Iverson, Jason Moran, Vijay Iyers and Kamasi Washington, have also identified Monk as an irreplaceable element of influence in their musical development and expression. In a recent interview with The Root magazine, top-selling contemporary jazz bandleader, composer, and arranger Kamasi Washington stated “if you’re a jazz musician and you think you’re not influenced by Thelonious Monk, either you’re not a jazz musician or you are influenced by Thelonious Monk.”

A legacy very much alive onstage today and in the studio, as Monk’s music is recorded and performed by other jazz and contemporary musicians with enormous repetition and reverence.

Remarkably, without self-promotion in his lifetime or anything comparable to album sales, Monk is the second-most-recorded jazz composer after Duke Ellington (Giddins, Gary; DeVeaux, Scott (2009). Jazz. New York: W.W. Norton). With the truest desire to simply compose and play, his nature did not allow for self-promotion or much desire to communicate at all, except on piano and to a few trusted friends, loyal advocates, and his dedicated wife Nellie.

Even more surprising, in keeping with his reticence for the public eye, Monk is one of five jazz musicians to have been featured on the cover of Time magazine (the others being Louis Armstrong, Dave Brubeck, Duke Ellington and Wynton Marsalis). Deserved recognition, but certainly not sought after by this musician’s nature or character.

Monk’s tribute albums number over 45, from such varied artists as the Kronos Quartet to Andy Summers, guitarist for the Police, and to legendary jazz pianist Tommy Flannagan. His son, T.S. Monk, a jazz drummer, released an ode to his father called Monk on Monk (1997), featuring Herbie Hancock, Ron Carter, Wayne Shorter, Grover Washington Jr., Roy Hargrove, Clark Terry, Geri Allen. A remarkable range of exceptional talent, and an endorsement of its own kind.

In the 1920s, after his family moved from the South to NYC, as a teenager he was steeped in the gospel music style, receiving rigorous training, and regularly winning the Apollo Theater’s weekly amateur music contest. Monk was then on the road for a year, at 17, with an evangelical preacher, “indoctrinated into the subtleties of rhythm and blues accompaniment.”

Upon later returning to New York, Monk’s most important gig would be established, hired as the house pianist at the legendary jazz club of the 1940s called Minton’s Playhouse. It was here that Monk would create a style of jazz that moved away from the big band swing era of Benny Goodman, Glenn Miller, Artie Shaw, and Duke Ellington (a significant influence on Monk). The birth of bebop was occurring inside Minton’s during sets and after, with musicians hooking up to play through the night. Monk’s jazz collaborators included Roy Eldridge, Howard McGhee, and Teddy Hill, to name just a few.

Mary Lou Williams, famed jazz pianist, composer, and arranger of this period, who also wrote and arranged for Duke Ellington and Benny Goodman, was a direct mentor for Monk during this intense inventive stage. Williams observed the new “fast-swinging,” sped-up tempo and extended soloing that was being created, with Monk at the center. “So, the boppers worked out a music that was hard to steal. The ‘leeches,’ they tried, and even our own guys didn’t give Monk the credit he had coming. While they even stole his idea of the beret and bop glasses.” (en.wikipedia.org/wiki/Thelonius_Monk) Dizzy Gillespie, Charlie Christian, Kenneth Clarke and Charlie Parker would move forward with the foundations laid down in Minton’s during that period, but Monk would be the “eye of what would become the bebop hurricane.” (biography.yourdictionary.com/thelonious-monk)

Loyal advocates in Monk’s professional and personal life would play critical roles in providing opportunities and promotion for performing and recording of his music, throughout his career. After Minton’s, he would make one of several important connections. Introduced to Lorraine Gordon, wife of Blue Note Records founder Alfred Lion, she would preach his genius to the jazz world and become an outspoken spokeswoman for the recognition of his musical art form and originality. His first major recording would follow with the Genius of Modern Music, Vol.1.

In 1948, Gordon would have to push the owner of NYC’s Village Vanguard to secure the first gig for Monk, whose under-recognized brilliance needed this critical mouthpiece. She would remain a loyal supporter throughout his life.

Monk’s marriage to Nellie Smith in 1947 would offer a true partnership of love, understanding, and support – demanding upon Smith to work, along with other loyal supporters, to intervene in circumstances acting on Monk’s behalf and best interest – both professionally and psychologically. Monk would later compose, without improvisation, a concerto love song to her, “Crepuscule with Nellie.”

Just as recognition and demand for gigs and thus exposure was gaining momentum, he was busted by NYC police in 1951 along with friend and fellow jazz musician Bud Powell for marijuana possession. Most likely thought to be Powell’s personal supply, Monk nonetheless stood by his friend and refused to testify against him. The result was his New York City Cabaret Card was confiscated and he spent 60 days in jail, but the musical impact was far more severe. Without an NYC Cabaret Card, Monk, technically, could not play any clubs that served alcohol, leaving him to perform in little-advertised, minor local nightclubs – illegally. For several years into the early 1950s, Monk would again depend on the kindness and loyalty of advocates and friends.

Baroness Pannonica de Koenigswarter entered his life in 1954 (a member of the Rothschild family and a patroness of several New York City jazz musicians). She became, along with his wife Nellie, an unwavering supporter, advocate, and lifelong friend. As stated in a New York Times article in 2020, entitled “The Baroness of Jazz,” she “served as a surrogate wife right alongside Monk’s equally devoted actual wife, Nellie; paid Monk’s bills, dragged him to an endless array of doctors, put him and his family up in her own home and, when necessary, helped Nellie institutionalize him.”

Throughout the 1950s, with additional recordings at Blue Note Records and then at Prestige Records, where he formed a now-legendary collaboration with Sonny Rollins, Max Roach, and Art Blakey, Monk’s reputation would rise substantially, particularly among fellow musicians.  During this productive musical period, Monk also recorded with Miles Davis, Charlie Parker, Gerry Mulligan, John Coltrane and Percy Heath, and released Piano Solo(Disques Vogue,1954), the first of his legendary series of concerts from Paris. In addition to cutting his first solo album, Pure Monk, the Paris recordings would distinguish and promote his emerging style and unique jazz direction to a larger international audience.

In 1957, with his cabaret card restored, Monk opened an engagement at New York’s Five Spot, leading a powerful quartet with a then-unknown newcomer, John Coltrane, on saxophone, Wilbur Ware on bass and Shadow Wilson on drums. This was a seminal period of recognition of the individuality of his compositional style that included acclaim for his unorthodox and unpredictable improvisation. Signed with Riverside Records, he produced several masterful albums in the late 1950s – Brilliant Corner,s which included Sonny Rollins and Clark Terry; Thelonious Himself with John Coltrane and Wilbur Ware; and Thelonious Monk with John Coltrane. With fellow jazz musicians now praising his mastery, Monk was developing sudden notoriety, particularly with both John Coltrane and Sonny Rollins “acknowledging him as their guru.” (biography.yourdictionary.com/Thelonious-monk)

His recordings with Riverside Records had done so well that in 1962 he was offered a contract from Columbia Records and their financial resources allowed Monk to be promoted more heavily than earlier in his career. Monk’s Dream, his first Columbia album, was released in 1963 and became the best-selling album of his lifetime. Columbia would further promote Monk’s newfound commercial exposure with several live recordings, Miles and Monk at Newport (1963), Live at the It Club (1964), and Live at the Jazz Workshop (1964). A personally and professionally satisfying moment would also occur in 1963, performing at New York’s Philharmonic Hall, playing a set of big-band originals. And, in 1964, Monk would appear on the cover of Time magazine – an extremely rare honor for a jazz artist.

Sadly, the 1970s ushered in a period of reclusiveness and withdrawal from performing and public life, with Monk choosing to remain solitary at home with family and not communicating with the outside world in words or music. Monk had also isolated himself from friends and colleagues, sliding back towards obscurity. There was speculation about his seclusion, though no explanation from the artist himself.  Record producer Orrin Keepnews noted in Keyboard Magazine, “He may have just worn down and stopped caring.” Most peer jazz musicians of his period, close to him, shared an already established understanding of his nature, that he didn’t require much communicating except on the keyboard or while performing. In failing health, his final performance was at Carnegie Hall in March of 1976. He died on February 17, 1982, in Englewood Hospital, New Jersey, after suffering a massive stroke.

In his own words are the lessons of originality and creation so vital to his identity as an artist. “I was about nineteen to twenty, I guess, when I started to hear my music in my mind,” Monk told Crescendo International, “so I had to compose music in order to express the type of ideas that I had. Because the music wasn’t on the scene. It had to be composed.” And on reflecting on the development of bebop, “I wasn’t trying to create something that would be hard to play. I just composed music that fit with how I was thinking…I didn’t want to play the way I’d heard music played all my life. I got tired of hearing that. I wanted to hear something else, something better.”

As Monk’s legacy continues to evolve in the hands and spirit of the next generation of jazz musicians, his influence continues to be enormous. Contemporary and veteran artists alike also continue this recognition as his compositions are performed regularly in top music schools, major concert halls, and international jazz festivals, fostering new listeners.