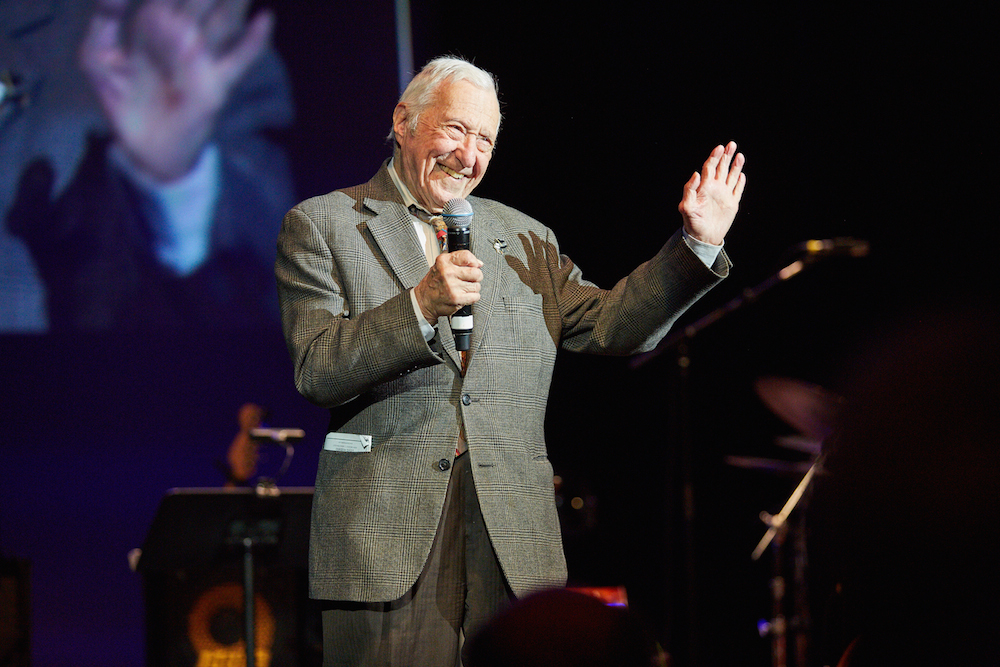 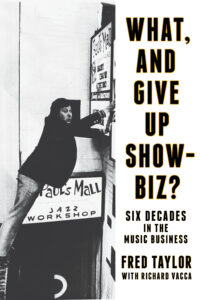 In his upcoming biography (December, 2020), What, and Give Up Showbiz?: Six Decades in the Music Business, Boston‘s late legendary and iconic music impresario Fred Taylor reveals six decades of promoting, booking, and personal friendships with an “A” list of musicians. With an ear for talent, endless energy, and a belief in each artist he promoted, Taylor would make an indelible mark on the early career of performers who would later become household names in the music industry. Anyone who met Taylor, whether you were an artist, fellow promoter, talent agent or simply a music enthusiast, found yourself inside an enormous circle of inter-connecting relationships. More often than not, you also became a lifelong friend of Fred Taylor. Throughout What, and Give up Showbiz? you hear an amazing, detailed first-person account of the people, places and events that were directly a part of his orbit, as booking agent, promoter, producer and marketer from the early 1960’s all the way up to his 90th birthday.

Taylor breathes life into this narrative, literally having a conversation with you, including many hilarious anecdotes, home-spun punch lines while always making you feel like you were re-living the moment with him. Through these chapters, an extraordinary personal intersection occurs with a wide range of historical talent. A gifted storyteller, Taylor walks the reader through memories of presenting artists such as Duke Ellington, Dizzy Gillespie, John Coltrane, Miles Davis, Stan Getz, Charles Mingus, Bob Dylan, Diana Ross, Pat Metheny, Norah Jones and Bruce Springsteen, as well as comedic legends like Flip Wilson, Richard Pryor, and Lily Tomlin.

Most remarkably, in an industry known for cut-throat contracts and cold marketing calculations that often treated artist as commodities, Taylor truly developed and maintained relationships with musicians that often lasted a lifetime. In this personal biography, Taylor frequently relates stories and recollections of artists he discovered and helped get on stage for the first time. Often, as well, he would be working behind the scenes of his clubs, up to performance time, making sure all the pieces came together, to ensure the best possible exposure for developing talent. A loyal promoter, and night-owl, he would be there for the final note of the last set.

In an early chapter, Taylor recounts the accident of a 1952 nightclub recording he made, at George Wein‘s Storyville club in Boston, of a then un-known modern jazz pianist Dave Brubeck, that would lead to his career start in the music business. In 1964, through his network of relationships, music agent Albert Grossman is referred to Taylor by George Wein, to “bring in” a young folk singer to Boston, who needs commercial exposure. The folk singer was Bob Dylan and Taylor would skillfully promote and market a sell-out audience at the Boston Symphony Hall. There are many instances like this throughout the storyline. Taylor strongly believes in these lines of coincidences, though clearly the biography reveals he has done the hard work to create these opportunities. Sue Auclair, president of Sue Auclair Promotions, who worked with Taylor starting back in 1981, when Miles Davis was booked at KIX in Boston, reflects, “I’ve probably done about a thousand shows with him [Taylor].” He clearly lived the maxim of one of his favorite lines, “An overnight success is about 18 years.”

His “ear” for talent wasn’t a coincidence, as shown in chapter after chapter, listening for what he refers to as “a quality that stands out—beyond good, then there’s great.” In example, Taylor admittedly not a “specialist” in rock, heard a ballad singer at William Morris Agency in New York City in the early ’70s, playing with a Dylan-like style and using street poetry. Taylor booked and promoted a then un-discovered Bruce Springsteen into his Boston clubs, and his sets sold-out.

The word “wow” is a frequent register for his ear. He describes the reaction of “excitement, a vibration, something resonates” when he first heard the sophisticated pop-jazz hybrid voicings of singer Norah Jones on the demo of her debut Come Away with Me (Blue Note, 2002). Jones has since sold more than 50 million records and received multiple music awards.

In 2004, child prodigy and jazz saxophonist and vocalist Grace Kelly came to his attention when she was 13 and her father Bob Kelly brought her for an impromptu audition, where she then floored Taylor with her version of “Over the Rainbow.” With his support, Kelly would release two CD’s by her 14th birthday, and has since performed around the world and recorded with Phil Woods, Dave Brubeck, Lin-Manual Miranda, Harry Connick, Jr., Gloria Estefan, Wynton Marsalis and many other stellar musicians. Throughout these professional chapters of Taylor’s life, his appetite for listening, and seeking to have that “wow” moment, never seems to have diminished.

In 1965, Taylor and his business partner Tony Mauriello, would finally have their own venue from which to stage talent. Purchasing two nightclubs on Boylston Street near Copley Square and renaming them Paul’s Mall and the Jazz Workshop, Taylor “broke” many upcoming musicians there from Bruce Springsteen to Earth, Wind & Fire and also comedians Lily Tomlin and Flip Wilson. With his love for jazz, Taylor’s two clubs particularly favored legendary musicians such as Ellington, Coltrane and Getz but also pushed the developing jazz fusion scene. With the next door proximity of Boston’s renown music school Berklee College of Music, leading jazz-fusion players like Pat Metheny, John Scofield and Al Di Meola and many others frequented the club in the ’70s.

He also recounts a special relationship with legendary jazz trumpeter and composer Miles Davis. Davis, known for eccentricities and directness, squared-off with Taylor his first night performing at the Jazz Workshop. Taylor asked how he’d like to “run his sets,” and Davis replied, “I came here to play, man.” Taylor relates, “I told him we opened at nine and closed at two and he was in charge, and I went away.” After the set, Davis asked him what he thought of the band and Taylor told him that he thought they could be better. Surprised at Taylor’s directness, Davis said, “you know, you are right.” According to Taylor, “that little interaction set our relationship. Miles didn’t like any flattery or puffery.” They maintained a life-long musical connection and Davis would only come to Taylor for bookings in Boston, also breaking the seminal jazz-rock release Bitches Brew (Columbia, 1970) at the Jazz Workshop in 1970.

The second anchored part of Taylor’s night club business career was the genesis of Scullers Jazz Club at the Doubletree Guest Suites Hotel in Boston starting in 1991. Here, under his dynamic booking management, Boston and New England would be offered an enormous variety of renowned talent and the brightest upcoming stars as well as second chances for musicians seeking a comeback. Featured, on any given night, was a worthy newcomer or a top-drawer performer like Tony Bennett, Lou Rawls, Wynton Marsalis, Harry Connick, Jr., Quincy Jones, Norah Jones, Diana Krall, et al.

And again, the personal touch was always there, caring for the audience and wanting feedback, “I liked to stand by the doorway afterward, mingling with the people leaving. I was gratified whenever someone said, ‘Keep this music going, this is wonderful.’ It made me feel like I was the keeper of the flame.”

What, and Give Up Showbiz closes with the establishment of the “Fred Taylor Endowed Scholarship Fund” at Berklee College of Music in 2017. An honor that completely surprised Taylor in the twilight of his career and life, “As you get older, you start to wonder if you made your mark, if you have a legacy that will be remembered after you’re gone. Here is the answer—very meaningful, I can’ tell you how humbling this is for me.”

On September of 2017, the brightest stars gathered at The Berklee Performance Center for a gala celebration for a scholarship fundraiser, delivering heartfelt performances. Taylor was kidded that for once he had no booking or promotional role. Many renown members of the jazz community also had words of tribute for Taylor that evening, thanking him for their first booking and on-going support. Phenomenal jazz guitarist, composer and virtuoso Pat Metheny recalled Taylor’s sincere interest and generosity, “Fred really listened to the music… and there are standards set that represent honesty and decency… and an infrastructure that can only exist with people like Fred Taylor… otherwise we would not have had a platform.”

Taylor’s other adoptive family receive his deserving special mention. Bob Kelly and Irene Chang, Grace Kelly’s parents, who developed the idea for the “Fred Taylor Endowed Scholarship Fund,” became intimate friends and caring supporters of this promotional and booking machine, who never stopped to look after his own health.

But clearly, on this amazing personal journey, through six decades behind the scenes in the music business and getting acts on stage, Taylor didn’t want to stop for a moment. As often quoted by this master impresario of the music industry, and a paraphrase from legendary jazz composer, arranger and pianist Duke Ellington, “You can talk about the past, but the future is much more interesting.”