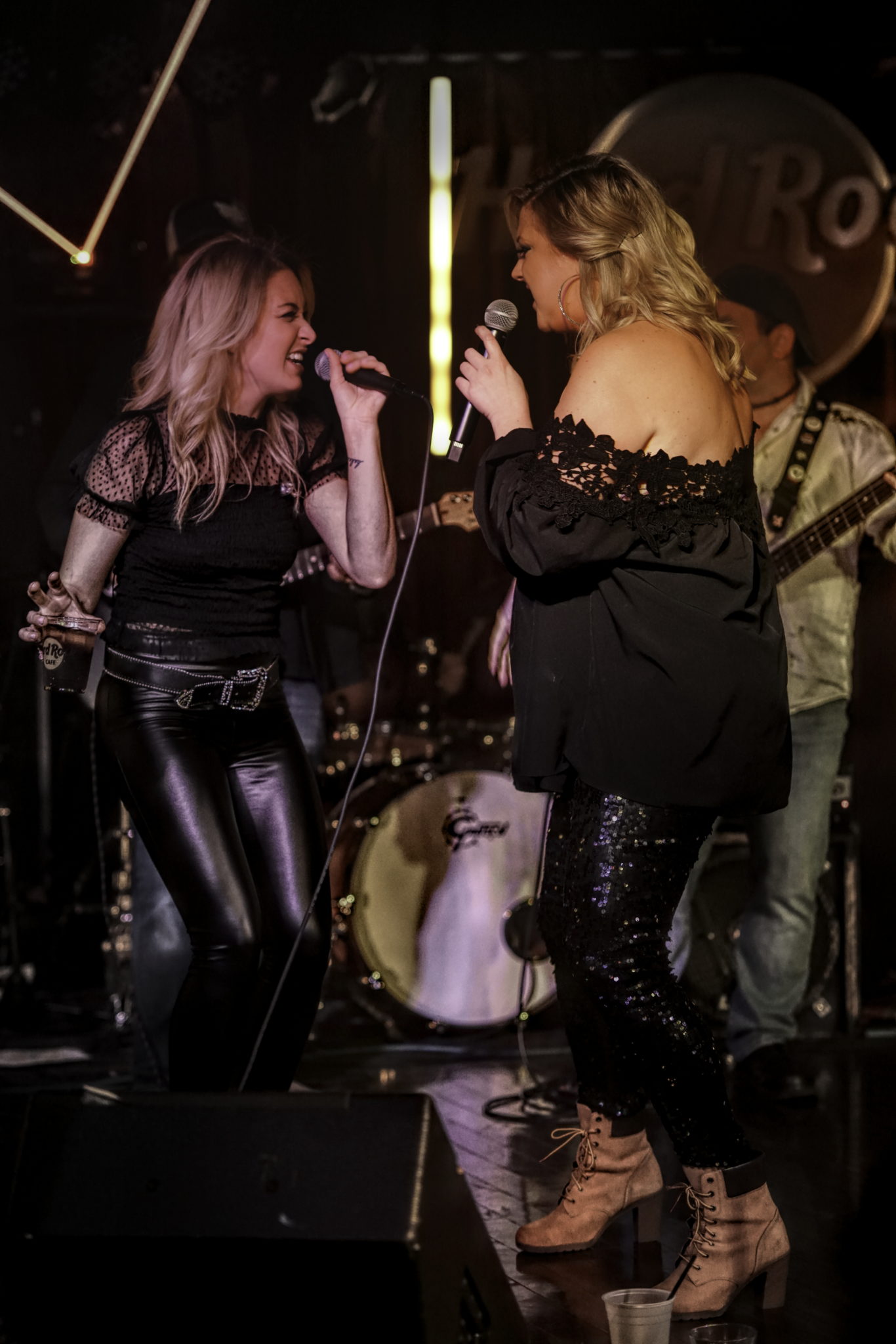 Taking the stage for a “blow-out” sold-out performance, both Massachusetts-area country singers Annie Brobst and her band and Samantha Rae with Whiskey-6 delivered an over-charged performance from the heart, with full throttle voices to entertain and remind the Hard Rock Café audience of the importance of funding research for women’s cancer. With warm-up by Nashville recording artist, singer/songwriter Darren Bessette on acoustic guitar, the crowd was delivered a set of crafted ballads along with some covers of favorite country songs that had some already singing in their seats.  With an audience in full spirit for the cause of the evening benefit, the atmosphere and upcoming musicians were well primed for this sold-out, standing-room only show.

Samantha Rae and Whiskey-6 opened the night’s performances with obvious chemistry and friendship as the band seemed to be on their own front porch. Rae’s sometimes raspy, sometimes smooth and sexy vocals carried the songs along with lead guitarist George Politis’ active string picking, and also sharing vocals. Whiskey-6 brought the full line-up of traditional country instruments to solid effect, including banjo, mandolin, country fiddle, and electric & acoustic guitars. Also special guest Sandy Gennaro, international touring/session drummer, joined the band for a song and drum riff or two. Playing several cuts from their 2019 EP release Party Town, including the title song and “First Time in a Long Time”, and crowd pleasers such as Fleetwood Mac’s “Go Your Own Way” and Lynyrd Skynrd’s “Sweet Home Alabama”, the audience was drawn in by the energy on stage, with Rae front and center. During the 2ndset, Rae had two sign holders on each side of the stage, reminding the audience of the cause for research, funding support and awareness of women’s cancer.

Annie Brobst, one of the most sought after country singers in New England, and having just been awarded 2019 New England Country Music Award for Best Female Country Music Artist, took to the stage next with swagger and presence. Backed up by a tight, rhythm-driven, in-synch band, Brobst delivered both spirited versions of romping songs and personal reflections from both her debut EP release Ghost(East Lex Records, 2016) and cuts from her first full album My First Rodeo(Annie Brobst, 2019). Ballads including “Buy Me A Boat” and “Everythings Gonna Be Alright” were life-experience stories that were made more poignant because of the evening’s benefit.

Back almost a year ago, both country music singers Annie Brobst and Samantha Rae and drummer Jay Dellisola with Whiskey-6 – all jumped in on the project, with a community spirit of involvement. The opportunity to “do” a fundraiser “is the feeling of giving – rewarding, not an obligation” as expressed by Whiskey-6 drummer Dellisola. They were “joining forces” as proclaimed by collaborating country music singer Annie Brobst – to “blow-up” this show in turnout and performance – and all for a very worthy cause. As simply stated by Rae of Whiskey-6 “cancer affects everyone, one way or another.”

With “Country Women Concert for Women’s Cancer”contributing all proceeds from the evenings (sold out) performance along with sales of concert merchandise, raffle and auctioned country music memorabilia (including a signed Charlie Daniels’ fiddle), a significant donation was made, going specifically to Susan F. Smith Center Dana-Farber Cancer Institute in Boston. But this effort may prove to be more than just a one-night stand, as Brobst, Rae and Dellisola both suggested that they would like to make it happen again. Having clearly satisfied their audience at the Hard Rock Café with the evening’s performance, all musicians involved were also feeling the reward of giving.