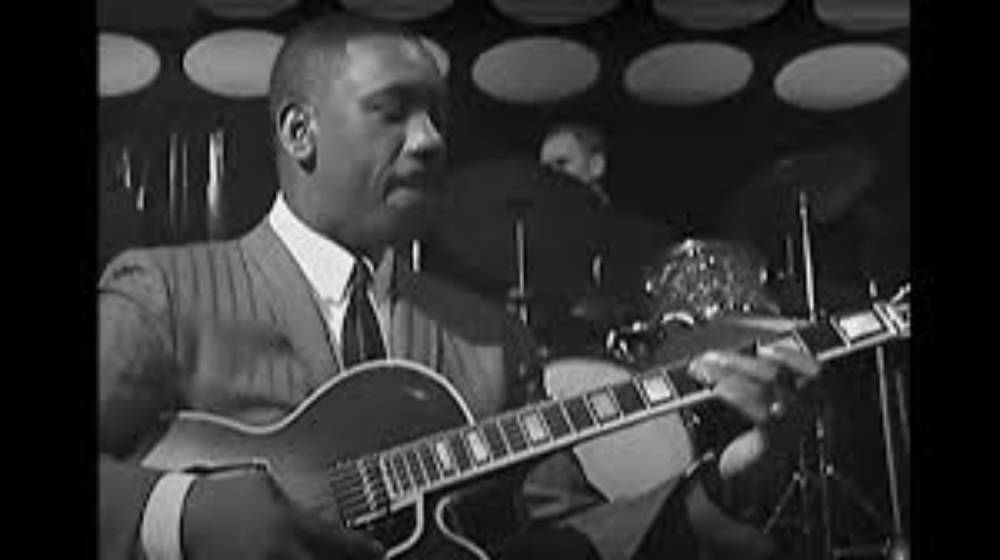 The telling originality and influence of a great innovator in jazz, based on their instrument, technique, and voicing, is often echoed by the number of outstanding musicians of future generations that advance the established style. The signature thumb-based strumming method, soft tone, and octave-chordal sound of Wes Montgomery’s Gibson is instantly recognizable from the opening notes of any recording or performance. From a superb list of accomplished legends on jazz guitar, you can readily hear his overall musical presence: Pat Metheny (listen to Have You Heard), George Benson (listen to Affirmation), Pat Martino (listen to Four on Six) or Kenny Burrell (listen to Billie Jean). Seminal jazz guitarist Joe Pass, often considered in the same breath and at the top of the short list of greatest jazz guitar virtuosos, stated in an interview, “to me, there have been only three real innovators on the guitar—Wes Montgomery, Charlie Christian, and Django Reinhardt.” In many ways, post-Wes Montgomery generations of jazz fans have been hearing his style through some of their favorite contemporary jazz guitarists without making the connection.

Born in 1923 in Indianapolis, Montgomery would later join his brothers, Buddy and Monk, in their home city, as young men searching for work during the aftermath of the Great Depression. His narrative speaks of hard times, family divorce, and moving to another state – a profile of poverty experienced profoundly by Black Americans during this period.

By 1943, Wes and his brothers returned to Indianapolis, and he had already experienced playing his first guitar, a tenor 4-string, purchased for him by his older brother Monk. Montgomery would then be forever changed, in a musical sense, by hearing pioneering American swing and jazz guitarist Charlie Christian on recordings. He would be inspired to buy his first 6-string guitar and practice relentlessly. With his brothers Monk on electric bass and Buddy on piano, jamming sessions began as Montgomery was copying and emulating Christian’s style and signature sound. As a trio, they were beginning to play all around the nightclubs in Indianapolis after working their day jobs.

In 1948, coming to the attention of bandleader and vibraphone master Lionel Hampton, Montgomery, at 25 years old, would be hired by and begin touring with the Hampton band for two years, at times playing with Charles Mingus, Milt Buckner, and Fats Navarro. Wes’s brothers were enjoying some degree of success with their own band, the Mastersounds, and they invited him to record with them after his stint with Hampton. An exemplary sampling from this group can be found on Fingerpickin’ (Blue Note, 1958).

Montgomery would then be discovered by the upper tier of bandleaders at the forefront of jazz, as word had spread, from nightclub play and recordings with his brothers. He was developing professional attention, as cited in an NPR profile, “Cannonball and Nat Adderly were flocking to the Missile Room to witness the new sensation. Riverside Records producer Orrin Keepnews was blown away by Wes’s virtuosity and signed him on for 25 sessions.” Wes’s second album, The Incredible Jazz Guitar of Wes Montgomery (Riverside, 1960), earned him Downbeat magazine’s “New Star” award in 1960.

The jazz music critics’ overall reaction, astonishment, and praise for Montgomery’s unique style and technique, after The Incredible Jazz Guitar of Wes Montgomery release, has held as a standard measurement of his innovative jazz guitar method. AllMusic critic Michael G. Nastros praised the album, writing: “Setting him apart from the rest, this recording established Montgomery as the most formidable modern guitarist of the era, and eventually its most influential…clearly talented beyond convention, consistently brilliant, and indeed incredible.”

According to most jazz critics, Montgomery’s finest recording period includes The Incredible Jazz Guitar of Wes Montgomery (Riverside, 1960, Movin’ Along (Concord, 1960), So Much Guitar! (Original Jazz Classic, 1961) and Full House (Riverside, 1961), dating from 1959-1963.

During this richly productive period, he also performed and toured with various groups, including his brothers; John Coltrane; Wynton Kelly’s trio, and his own trio. His reputation was being established by listeners, jazz journalists and aficionados, hearing an utterly unique sound on the jazz guitar. Jazz author James Sallis, in his book The Guitar Players (Morrow, 1982), observed, “When Wes hit a string you felt it, and it wasn’t just a note, a C-sharp or B-flat, it was part of the story he was telling you.”

As jazz recordings were in a period of low demand in the mid-‘60s, and when Riverside Records went bankrupt, Creed Taylor of Verve Records signed the acclaimed guitarist, “steering his career in a different direction.” Several jazz artists had found commercial success with a pop- oriented blend including trumpeter Herb Albert (Taste of Honey), The Ramsey Lewis Trio (The ‘In’ Crowd) and even Louis Armstrong (Hello Dolly) – all were rediscovered by a new audience by playing more popularized compositions that could meet radio-play demands. Montgomery’s Goin’ Out of My Head, an R&B cover, crossed over to the popular music charts as well, earning him a Grammy Award for Best Instrumental Jazz Performance in 1960.

Now with Verve Records and only producing a few straight jazz albums, the innovations of this stellar stylist had transitioned to the commercial blend of orchestrated renditions of popular songs, including some Beatles’ hits, movie soundtracks, and straight ballads. As stated by music editor Scott Yanow of AllMusic, in his review of Goin Out of My Head, “Accompanied by a wasted all-star big band given dull arrangements by Oliver Nelson, Montgomery mostly sticks to playing themes, even those as dull as “Chim Chim Cheree” and “It Was a Very Good Year.”

Though remaining more mainstream in his recordings in this second phase of his musical career, Montgomery would continue to improvise on solo work during live performances.

He defended criticism and was aware of growing dissatisfaction in the jazz community with his commercialism. “There is a jazz concept to what I am doing, but I’m playing popular music and it should be regarded as such.” Unconvinced, there remained disheartened jazz fans and critics alike that felt he had traded his musical integrity for best-selling recordings.

However, his historical groundbreaking impact on his instrument remains solidly intact. A wide range of testaments from other exceptional jazz guitarists, both contemporaries and current, reaffirm his unprecedented, inventive method and approach. Grammy-award winning ‘80s period smooth jazz guitarist Lee Ritenour, (nicknamed “Captain Fingers”), a master instrumentalist with fluid and impeccable style, speaks to his idol’s technique: “Wes played with his thumb as opposed to a pick, freeing himself from rhythmic constraints and typical phrasing.” Ritenour’s tribute recording Wes Bound (Capital Records, 1993) offers a wonderful mix of renditions of Montgomery compositions as well as originals by Ritenour.

Multi-Grammy Award winning jazz guitarist impresario and bandleader Pat Metheny recalls an early childhood experience, watching Montgomery perform in Kansas City, as he sat at the edge of the stage at the age of 13. “ It was unreal, Wes was playing his Gibson L-5, a lot of songs from Verve period – like Goin’ Out of My Head – but really stretching out on them. The main impression was…that he made it look so easy – offhand the way he played physically – the instrument was sort of a non-issue for him, the music was just kind of flowing out.”

Wes Montgomery died in 1968, but his mark on jazz guitar technique, originality, and a much-emulated style, have become recognized markers, living well beyond him and the evolution he brought to the instrument. He would also contribute significantly, specifically during the ‘60s, to expanding the range of audience from early recordings for jazz aficionados, to a larger general public who did not require a critical understanding of the boundaries between musical genres. In an article for Jazz Journal International (July, 1986), jazz critic Adrian Ingram affirmed, “Even when he was immersed in blatantly commercial surroundings, Montgomery never lost his ability to create sophisticated, tasteful jazz. He could turn tap water into vintage wine, though it is sad he was forced to do so, so often.”