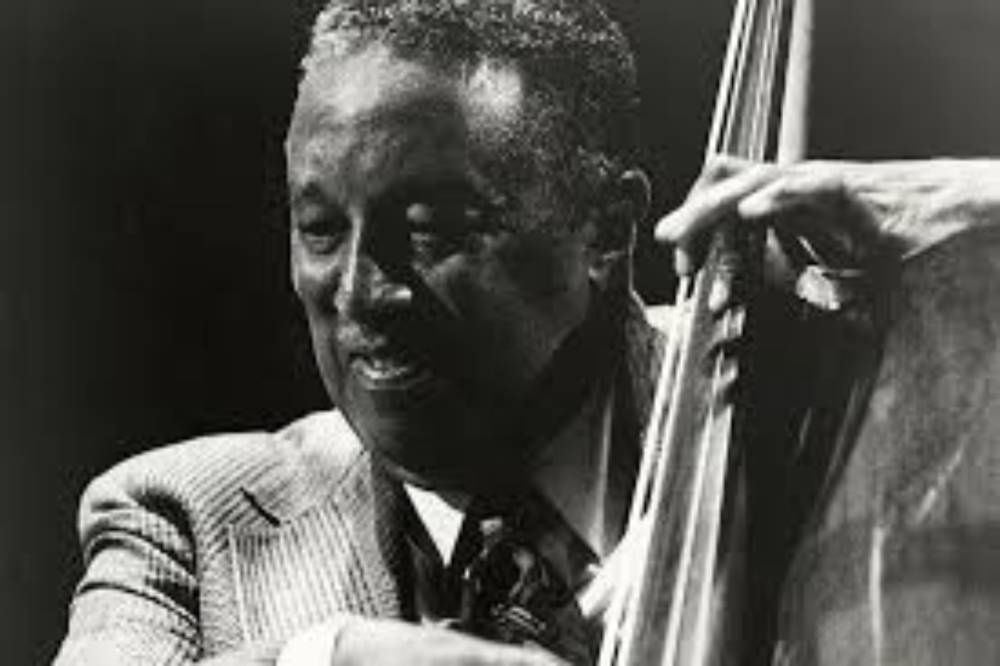 In the arena of large jazz orchestras – whether it be Duke Ellington, Count Basie, or Dizzy Gillespie – the choice of an individual musician becomes a critical decision for any bandleader. Ray Brown, legendary acoustic double-bassist, DownBeat Jazz Hall of Fame winner, and peer-less performer of his instrument, was the obvious choice for many bandleaders and vocalists.

An extraordinary stylist and with an innate sense of swing, Brown would perform and record with Duke Ellington, Ella Fitzgerald, Oscar Peterson, Dizzy Gillespie, Frank Sinatra, and other top-drawer modern jazz musicians and bandleaders. At the time of his death in 2002 at age 75, Brown had played on over 2,000 recordings and bridged the gap between orchestral jazz and bebop and modern jazz. As summarized by the New York Times in his 2002 obituary, Brown had intersected with an era of jazz giants, “playing with Dizzy Gillespie, Charlie Parker and others who invented bebop in the 1940s; was a longstanding member of the renowned Oscar Peterson Trio; and was part of the original lineup of the Modern Jazz Quartet. He also accompanied singers from Frank Sinatra to Linda Ronstadt.” (Source: nytimes.com/2002/07/04/arts/ray-brown-masterjazz-bassist-dies-at-75.html)

Born in Pittsburgh, PA in 1926, Brown would begin piano lessons at the age of eight. As the narrative goes, Brown discovered how many pianists there were in his high school, and according to NPR’s Jazz Profile, “Brown thought of switching to trombone, but could not afford a horn. The school orchestra needed a bass player and had an extra instrument.”

As with many other future prominent musicians of the 1940s, he was looking for opportunities in orchestral bands for employment and a career start. Brown was listening extensively to Duke Ellington but focusing on Ellington’s legendary jazz bassist Jimmy Blanton. He would later reflect on learning and practicing Blanton’s bass lines “every day and while still in high school.” He directly began plying his newfound trade in jazz clubs in and around Pittsburgh. (npr.org/programs/jazzprofiles/archive/brown_ray.html)

In the mid-1940s, reading about NYC’s epicenter of jazz on 52nd Street, Brown bought a one-way ticket at the age of 20. By coincidence and circumstance, he would meet musician, composer, and arranger Hank Jones, who would become a pivotal influence and mentor for the start of his career. Within just the first several days of arriving in New York City, Jones would introduce Brown to bandleader, Bebop founding member, and trumpeter Dizzy Gillespie, who hired him instantly. Brown recalled that moment, “I don’t want to question fate, but I can’t help but wonder how much of what happened was me, and how much my lucky star.” (NYT, May 23, 1996). A remarkable step deep into the developing Bebop scene and amongst the seminal players, “When Brown showed up (on time) for a rehearsal the following day, he was introduced to his new bandmates – Charlie Parker, Bud Powell, and Max Roach. Twenty years old, a complete unknown, only 24 hours in town. Go Figure.” (Zwerin, NYT, May 23, 1996)

Gillespie was filling out a large orchestral band with unique talent as well as being instrumental in developing Bebop, and Brown was a standout on bass. “Ray Brown, on bass, played the strongest, most fluid and imaginative bass lines in modern jazz at the time, with the exception of Oscar Pettiford,” Gillespie wrote in his memoir, To Be or Not to Bop: Memoirs of Dizzy Gillespie (Doubleday, 1979). This intense and mentored musical relationship would run from 1946 to 1951. Brown would also be introduced to other exceptional innovators and dynamic jazz musicianship, performing with vibraphonist Milt Jackson, drummer Kenneth Clarke, and pianist John Lewis, who formed the rhythm section of the Gillespie band.

Another important personal and professional intersection occurred in Brown’s life during this same period, as he was introduced to the “First Lady of Song,” Ella Fitzgerald, who had joined Gillespie’s band as a special attraction for a tour in the southern United States. He became her accompanist, musical director, and in 1948, her husband. They would both tour with other star musicians in Norman Granz’s Jazz at the Philharmonic tours during this period, and for nearly 18 years, Brown would appear in “every major club and concert hall throughout Europe, Asia and the U.S.” (concord.comartist/ray-brown). Brown and Fitzgerald would divorce in 1953, citing career pressures and demands, though they would continue to perform together. (wikipedia.org/wiki/Ray_Brown_(musician)

In the early 1950s, Mr. Brown would reunite with colleagues from the Gillespie band Milt Jackson, John Lewis, and Kenny Clarke, to form the original Modern Jazz Quartet. The influence of Miles Davis’ “cool” jazz sound would be heard in the style and tone of this seminal quartet.

A synthesis of classical, jazz, blues, and bebop would be incorporated with jazz pianist John Lewis leading this quartet and forging this unique direction.

From 1951 to 1966, Brown would perform and record with the Oscar Peterson Trio with Peterson and guitarist Herb Ellis. Peterson’s trio, “with Mr. Peterson’s swirling, intricate solos” was consistently ranked as among jazz’s most popular groups during the 1960s, with an enormous reputation for stellar instrumental musicianship. Brown was at the top of all critic and public polls in jazz circles as well, and in Peterson’s estimation was “the epitome of foresight, sympathetic foresight.” Brown would go on to play with the Oscar Peterson Trio for the next 15 years. Peterson would later reflect, “I don’t think another group has achieved that closeness, that ‘breathe together’ band that we had.”

During this same period with Peterson’s seminal trio, Brown would record with the extraordinary period chordal jazz guitarist and mentor Barney Kessel. In 1955, Kessel formed a now-legendary trio with Brown and drummer Shelly Manne, recording 5 albums, starting with The Poll Winners (Contemporary Records, 1956). The series helped establish guitar, bass, and drums as a viable trio format as well as burnishing Brown’s reputation as a dedicated mentor to many up-and-coming jazz musicians. Modern jazz bassist John Clayton, who played with the Monty Alexander Trio (1975-77) and the Count Basie Orchestra (1977-79), speaks about this close personal and professional relationship in the current DownBeat magazine’s Readers Poll edition (“Ghosts in the Room”, pg. 16-17, Dec.2021), “John Clayton was in high school when he first met his mentor, having signed up for an extension course at UCLA taught by Brown. ‘Ray Brown saw how green and hungry I was and he let me follow him around.’” This relationship gave Clayton early working stints, as Brown was responsible for introducing him to the Monty Alexander Trio and the Count Basie Orchestra.

After leaving Peterson’s trio, Brown would, in his own words, “fulfill a lifelong dream” and work with Duke Ellington just prior to his death. The two recorded a tribute album to Brown’s boyhood idol, This One’s for Blanton (Jimmy Blanton).

With the advent of popular audience-style TV variety shows, he would be the established bassist for all of Frank Sinatra’s television specials in the ‘70s and go on to be the acting director of the Monterey Jazz Festival for two years, as well as the Concord Summer Festival in 1976 and 1977.

In the later part of his career, Brown teamed up with Brazilian guitarist Laurindo Almeida and flutist Bud Shank, who were both pioneers in the Bossa Nova sound, which was popularized by other American artists, particularly jazz saxophonist Stan Getz. Under the name of The L.A. Four, Brown would record with this quartet from 1974 to 1982.

In the early 1980s, Brown was integral in starting the career of a then-unknown nightclub jazz singer and pianist, Diana Krall. Their musical relationship would continue as Krall would be encouraged to move to Los Angeles and study under Brown and other established jazz musicians in the L.A. area. Reciprocation in recording finds Brown on Krall’s husband Elvis Costello’s 1986 recording, King of America (Columbia, 1986).

Venturing into a direction of mixing jazz and classical, Brown developed a musical collaboration with German-American pianist, composer, and conductor André Previn. A trio was formed that included the peerless instrumental jazz guitarist Joe Pass. Together, they would record a popular and best-selling recording, After Hours (Telerac, 1989).

He would return for one last reunion with Oscar Peterson and Milt Jackson for 1999’s The Very Tall Band, a landmark collaboration recorded live at the Blue Note in November 1998. In 2001, Brown released the first-ever Live at Starbucks album and SuperBass 2, another live recording, this time from the famed Blue Note in New York City. Bassists John Clayton and Christian McBride were featured along with Brown on SuperBass 2.

Brown is the recipient of innumerable awards, including the All-Star Poll Award in Playboy; a series of Grammy Awards; DownBeat’s Reader’s Poll Awards, Jazz Critic’s Poll Awards, and many others.

Brown’s popularity as a bassist for all genres of jazz music – bridging traditional jazz with Bebop to cool jazz and then popular music, even with some experiments into classical directions – never changed the caliber and integrity of his performance or command of his instrument. His career resounded with variety and finding broad interconnections with a long list of extraordinary bandleaders and musicians. Reflecting on the phrase of fellow acoustic jazz bassist and legend Ron Carter, “My responsibility as a bassist and bandleader is using every opportunity to create spectacular music” certainly applies directly to Ray Brown’s far-reaching career as a performer, bandleader, and his wide range of superb recordings.