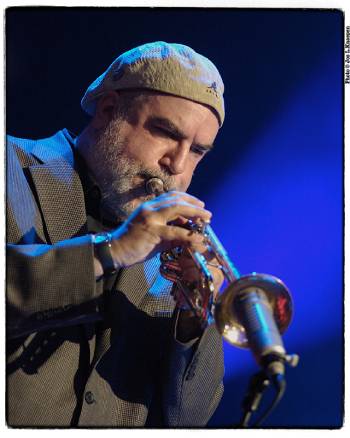 Jazz trumpeter and composer, Randy Brecker, has been at the center of seminal jazz-funk groups with his late brother Michael (on saxophone) through the mid-‘70s and early ‘80s.

Brecker has helped shape the sound of jazz, R&B, and rock for more than four decades. Playing both trumpet and flugelhorn, he has performed all over the world and recorded on hundreds of albums by a wide range of artists from James Taylor, Bruce Springsteen, and Parliament/Funkadelic to Frank Sinatra, Steely Dan, Jaco Pastorius, and Frank Zappa.

WICN caught up with Mr. Brecker at Jimmy’s Jazz and Blues Club in Portsmouth, N.H. A newly opened supper club with a million-dollar sound system (and studio for recording), in a fully renovated circa 1920s landmark building. He performed a set of jazz compositions from his travels and recordings around the world, accompanied by his wife and co-bandleader, Ada Rovatti, on saxophone, and his current quintet. Brecker will next begin a European tour with legendary jazz drummer Wolfgang Haffner’s Dreamband.

WICN: As you and your brother Michael are recognized as the seminal jazz–funk group of the mid-‘70s and early ‘80s – and you’ve continued that tradition to the present — why do funk and jazz work so well together?

Randy Brecker: That’s a good question. It’s all coming out of the same roots, which is the African-American experience, for the most part, and blues and swing. Swing on the eighth notes, that’s got a little different feel, articulation, than R&B and soul music, but it’s all coming out of the same place. A lot of people don’t realize that on those albums (Brecker Brothers’ jazz-funk releases in the mid-‘70s and early ‘80s), they’re all jazz musicians playing in the background. And that goes for all the pop, soul, and funk records made in Philly, Detroit, L.A., and Chicago for that matter. It was all the best musicians, in town, playing all the background parts – and they were again – all jazz musicians. So – that’s the truth.

WICN: When you enter a musical style, in your varied and diverse recording & performance career – be it R&B soul, swing, funky-jazz or jazz fusion – what moves you into that particular sound? Or away from another?

RB: Well, this probably isn’t a popular answer – but – I just wanted to make a living. I’ve enjoyed playing different kinds of music. I’ve enjoyed being a so-called “sessions” player, or as we were known then as “studio cat.” All the music was related and as long as it was professionally done and everyone was a professional musician – knew how to play in-tune, knew how to play with good time and the right kind of feeling – then the particular type of style of the music wasn’t as much a concern for me. I’d heard it all as being connected – just different styles of American music.

But, I also wanted to make a living. Some guys (musicians) didn’t want to play all that stuff. I remember asking the great trombonist “Slide” Hampton, and I was playing with him a lot (during this period) and I asked him, ‘Slide, I’m doing a lot of studio work on the side, and I’m back in town, do you want me to help you to get into that?’ And he just didn’t want to do that.

So, it comes down to a personal choice, but I also enjoyed that kind of work. It wasn’t just making a living at it.

WICN: Do some forms of jazz (for you) offer a “deeper well” to explore? And does that pathway take you to more intense musical exploration?

RB: Well, I’m a Be-bopper at heart. That’s what I came up with, musically. But, in the ensuing years, particularly, I have to always give Wynton (Marsalis) credit for exposing me and other guys who were Be-boppers, who didn’t want to go “back” – because other earlier forms of jazz were “corny.” We didn’t want to go hear swing or the New Orleans stuff that started it all, but we were all completely proven wrong, for lack of a better word, by Wynton. And that introduced me to so much other music. I got deeply involved in jazz history and started to realize the jazz connections between the past and the present and how great all that music is. It suddenly dawned on me that I was being an elitist somehow, and it was just a dumb thought, on my part, to overlook all that great stuff. So, that’s helped inform the music I play now. I constantly want to go back and try and learn about the beginnings and just how one thing influenced another and who influenced another. And now it’s all at your fingertips with YouTube and all, you know, and all the online videos you can see. So, it’s just a fascinating journey that has also helped me through the last 18 months of Covid. There’s so much to learn and still is, so I’m just at the tip of the iceberg.

WICN: How would you characterize the difference between the sound of the trumpet and the flugelhorn?

RB: I’ll play flugelhorn tonight for instance (at Jimmy’s Jazz and Blues Club). Most trumpeters do. It’s a similar instrument with a slightly different sound and conception. So, certain tunes speak to me more on flugelhorn than on trumpet and vice-versa.

WICN: How do other jazz instruments – like guitar or piano – influence or affect your playing?

RB: Of course, we don’t only study our own instrument, as that would be a foolish endeavor.

We study every instrument for that matter. I mean, I’ve gained so much knowledge from other instruments. Of course, when you play, it’s a conversation – if you’re playing with good musicians. And we try to have as much interaction with other musicians as possible. But I’ve also learned, for instance, so much from the saxophone. I play a little drums. My brother was a fine drummer. We always had a set (of drums) and learned what does what in the rhythm section. I’ve played piano, not well, but enough to get around. If somebody gives me a set of changes, I can slowly play them on the piano. So, it’s harmony, melody, and rhythm. You have to be well-rehearsed in all three to be a good musician and know how the three elements interact, and where to favor one or the other. All the components are important.

WICN: Reflecting on the brilliant modern jazz pianist Bill Evans’ famous quote about performing, “stick with truth and beauty, and skip the rest,” how does that resonate with you?

RB: I did play with Bill Evans, very briefly, just sitting in. And I played a lot with his sidemen like Eddie Gomez, Marc Johnson, Joe LaBarbera, and all the guys that played with him.

(In response to Evans’ quote) That’s what we do. As musicians, we have to trust each other, because you like to go out on a limb, so to speak, and take chances if you’re playing with the right players. And that means you have absolute trust in one another – there’s no making mistakes. If there is a mistake, we go with it, follow it and follow it out the other end. So, in a way, we like mistakes.

WICN: Having listened to your Randy in Brazil recording, and you’ve talked about your love for Brazilian music – (and I am a huge fan of Stan Getz’s Bossa Nova period w/ Gilberto)

I went to Wikipedia under “Brazilian Music” – and was amazed at the variety of styles listed there: Brazilian art music, indigenous & folk – – Choro, Samba, MPB, Bossa Nova, Brazilian Gospel, Gaucho music…musically, why do you feel their culture offers such variety?

RB: Well, It’s a big country and there’s a lot of different styles of music. Just like, in a way, in America, you might say, there’s a New Orleans style, you might say a Texas style, a Chicago style of jazz, a New York style of jazz, East Coast, West Coast. It’s a little more extreme because they have their own particular dances and rhythms, from the north and the south (of Brazil). It gets complicated – tribal stuff. There’s a lot of different influences, but music is very endemic to their culture, as are many south-of-the-border countries, shall we say, where music is really part of the social fabric. I could mention Cuba for instance, which sadly we’ve been at political odds with for so long, but Cuban music is just its own style right there. And everyone knows about music there. And everyone knows about music in Brazil too. I’ll never forget when I was first going there (earlier in his career) – I mean really, all the gardeners could play guitar, and sing, and play rhythms. It was amazing.

It’s also supported by the government. And most countries in South America have their own sound and style of music. They spawn great musicians. Some of the music came here, and in particular, Samba and Bossa Nova caught on when Stan Getz recorded that record (Getz/Gilberto, Verve, 1964), and I remember hearing Herbie Mann on the radio and raving about Antonio Carlos Jobim, and all the great composers there and how they influenced jazz. They did their own thing with it and it bounced back here (U.S.). Their (Brazilian) interpretation of jazz and so-called Latin music ended up with a certain backbeat that was Samba and Bossa Nova.

And Dizzy Gillespie, I might add, was a big part of bringing Afro-Cuban music and Brazilian music to America. An album I listened to as a kid – something like Dizzy Live — playing a bunch of Bossa Nova, with the right feel on congas and rhythm. He really brought world music to the table, along with defining Be-bop and redefining the way the trumpet was played and all the possibilities. Almost as a side thing, he brought all this music to America. He was truly a genius.

WICN: On the subject of choosing musicians and your relationship with other musicians: Legendary bassist and composer Ron Carter once said, “Jazz is personal – whether it’s me and Jim Hall, Art Farmer, Kenny Barron, Billy Higgins or my current trio – band members are my choosing – it’s all personal.” Can you share your thoughts about jazz and relationships with musicians being personal?

RB: Yeah – we play with players that we have something in common with and that undefinable thing that makes us brothers and sisters. The band tonight for instance features my wife (Ada Rovatti), who I’ve been happily married to for over twenty years. She’s a wonderful saxophonist and composer – she’s actually the co-leader of the band tonight. And my ex-wife is the piano player, so you can’t get much more personal than that. I play with people I feel comfortable with and if someone’s comfortable with me – it doesn’t follow that they’re comfortable with someone else. It’s a real personal thing. Ron’s (Ron Carter) right.