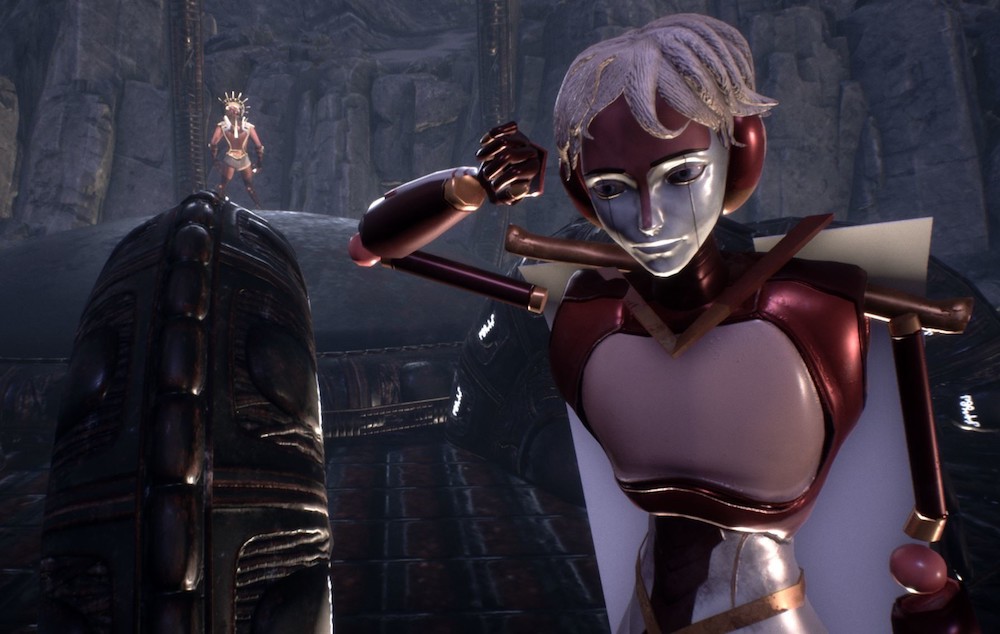 At first glance, the title of Cerise Jacobs’ upcoming world’s first videogame opera PermaDeath seems to imply another dark take or tale using the commercial success and wide-spread popularity of the multiplayer video game phenomenon . But anyone familiar with Ms. Jacobs’ librettists-driven operas, such as Ourboros Trilogy(2016) and most recently REV23(2017), knows that lying under the surface of this title will be an un-blinking look at an aspect of the human condition. Through her own production company, White Snake Projects, Jacob’s produces original opera “that combines high production values with a social conscience.” And PermaDeath  is no exception, as the lead heroine is a sophisticated addicted “gamer” who now faces ALS(Amyotrophic Lateral Sclerosis), a fatal progressive nerve disorder that has put her in a wheelchair and her avatar has suddenly become more critical in a high stakes “Tournament of Death”, that if she loses will sacrifice her closest companion.

Recipient of both the Rome and Berlin Prizes, as well as a 2014 TED Fellowship, composer Dan Visconti joins Jacobs’ latest project. He comes on the heels of rave reviews for his previous Warhol-inspired operettic score “ANDY: A Popera”, staged in Philadelphia,  which the Philadelphia Inquirer stated, “formed gorgeous new land where the tectonic plates of rock and classical normally only grind.” Also coming from a varied openly creative bent, away from traditional opera, Visconti served as artistic director at Chicago’s Fifth House Ensemble, a concert organization whose innovative programs and collaborations have included pop musicians from other cultures, educational partnerships with the incarcerated and at-risk youth, and an audience-interactive video game concert.

Both Jacobs and Visconti are also stepping deeply into the challenges of technology by presenting the visual projection of avatars as competing main characters and the unique needs of this pioneering  opera “with a fictional massively multi player online game (MMO) at its center.” For expertise with this project, Jacobs turned to two leaders in the world of designing and development of video games: Rhode Island School of Design(RISD) and Becker College. Top professors and departments in the areas of design and technology at both schools were given the challenge of developing a “powerful game engine capable of rendering in real time.” In example, a critical technological component of the “PermaDeath” is the software program Faceware, “a facial-motion capture technology” that renders “ the singer’s face and lip movements in real time so that their avatars mimic the live singing.”

Also expect the “Wow” factor of cutting edge multimedia to be abundantly on display in this production, as the screen that projects the video game will be an impressive 20’ x 40’, and the avatars may well dwarf their real-world counterparts on stage.  The audience is, in fact, is to experience first-looks at breakthroughs in high-tech innovation and use of video display on stage and theater.

While the technology leaps forward with its audience along for the ride, the message is still front and center in Jacobs’ libretto. Jacobs’ “Sonny” is directly and vividly grappling with her pain and motor control loss while trying to remain “champion” in her gaming world. The “human world” presented by the lead character “Sonny”, is sung by Rachele Gilmore, a coloratura soprano whose voice has been praised for “enormous vocal power, depth of feeling and beauty of tone”(Miami Herald). In this video-game opera, Jacobs’ “PermaDeath” attempts to take-on a metaphysical question of human mortality via ALS’s death sentence for the main character; tragically young at 20 years old, otherwise vibrant with a lust for life. Jacob further explains her perspective as a writer, “Most of my stories explore the difference between gods and humans – mortality- and the heroism of ordinary people facing death.” Furthering this message, Jacob’s includes non-human Greek mythological characters like Apollo, Artemis, Adonis, Aphrodite and Niobe, as the action avatars, representing a “personal schism between body and soul” as stated by Jacobs.

Jacobs’ fiercely original takes on storylines and re-interpretations(Ourboros Trilogy and REV23) have gathered acclaim from critics and audiences alike. PermaDeath will now offer its audience another unique collaboration of contemporary creative talents, from both librettist Cerise Jacobs’s vision of  humanity in a modern age, and the reputation of innovative compositional scores by the accomplished and boundary-pushing composer, Dan Visconti. Don’t miss your seat, in a real-time arcade, for the premiere of the first video game opera.