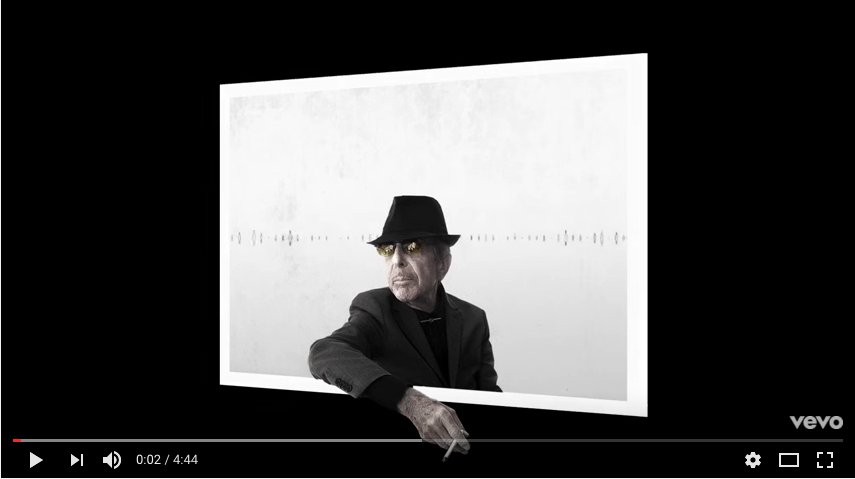 In a world of light beer Leonard Cohen was a full bodied red wine, in a world of puppy love in the corner coffee bar, Cohen was Romeo and Juliet played out in the steamy heat of a Verona night he was a maverick that never quite fell into any comfortable popular music genre, yet oddly never formed a new music style himself that other lesser mortals could follow or copy, instead contented himself trying on the safe blue raincoat of tried and tested music styles from blues and gospel to country and western, like a gigolo disguised in costume.

There of course is the rub. Cohen was an accomplished stage artist and musician who in the span of his long career grew into the role of performer, yet he never really achieved the status of pop idol to any specific generation, due in no small part to the sophistication of his lyrics which in retrospect are seen as an example the finest poetry of his time, this of course is the paradox.

The lyrics to Cohen’s songs are not the gentle and a tender lover’s caress of the standard charts busting popular love songs, full of platitudes, but daggers ripping into his heart tearing open the wounds of past romantic tragedy, exposing time and again the vulnerability and insecurity of his life. The lyrics to “Chelsea Hotel” are an example not of love but of the reality of finding comfort in a loveless lifestyle, the loneliness of fame. Cohen invites the listener not to the lobby of the Chelsea Hotel for a coffee, but to his very bedroom, to witness the intimacy of his love making “Giving me head on a unmade bed as a limousine waits in the street.” This is not about love; it’s about two people finding comfort in the act of love in a loveless world. A temporary distraction from a world outside the window, the limousine is the reality. In another line of the song he wrote perhaps the most poignant lyric of his life “Clenching her fist for the ones like us who are oppressed by the figures of beauty, you fixed yourself and said never mind we are ugly but we have the music.” Cohen and Janis Joplin could never be homogenized into a concept of pop idol, but stripped to the bones of Cohen’s writing supersedes the limited confines of pop, the daring and dangerous realness puts him on par with James Joyce, DH Lawrence and Garcia Lorca, the heroics to bare the soul and expose the very weakness and turn it into a strength places him far from the category of stage entertainer.

Cohen along with Dylan are examples of perhaps the best poets the 20th century produced and there are many of the opinion that they sold themselves cheap to a fickle music industry more intent on sales then content. This is more so in the case of Cohen’s career, who spent some uncomfortable periods slipping in and out of fashion with a north American audience yet maintained an almost disciple following across Europe.

For my part the music of Leonard Cohen has been the sound track to my life. I have said so long to several of my own Marianne’s and have heard the boats go by down at the river banks with my own Suzanne’s most of which in tribute to him were half crazy, his manic depression which haunted him throughout his life was in fact the generator of creativity and in turn, he turned the monster of his own uncertainty into the lyrics of love, hope and redemption that Van Gough would have recognized. I will miss him not as a super star who could hold a audience of thousands spellbound, but as a distant soundtrack to a thousand intimate evenings, to a kind and gentle man who never forgot the beauty of words, to a man who knew the irony of love and life, an imposter to stardom in the rock hall of fame, yet the brightest meteor that shone in the bleak sky above the doomed generation of the 60’s ideology. Cohen is a name that will be remembered long after the other guests of the Chelsea Hotel have checked out and are forgotten,