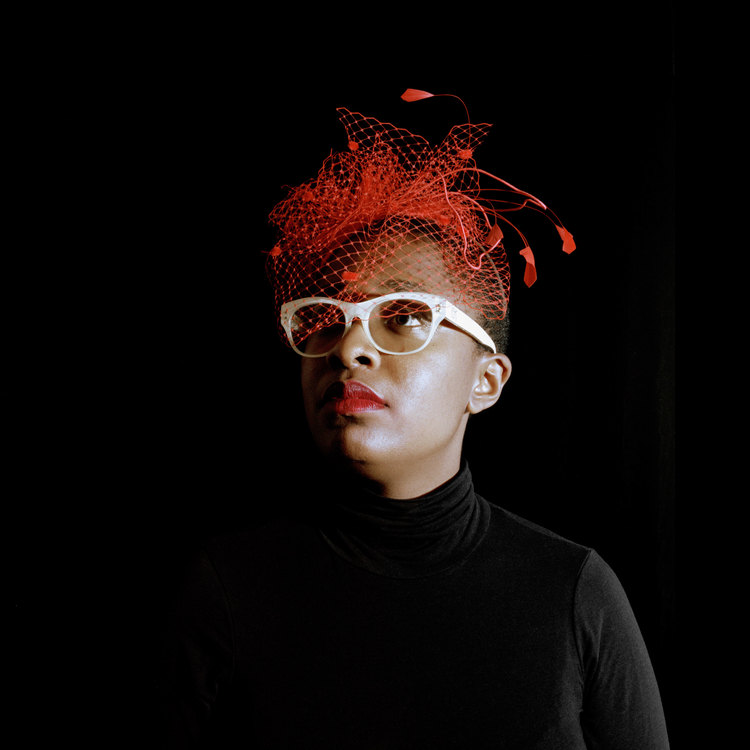 Cécile McLorin Salvant, is a composer, singer, and visual artist - always on the edge of creativity.(photo credit Mark Fitton- http://www.cecilemclorinsalvant.com/photos

Looking at the substantially self-guided career of a young performer, with as many upper-tier awards, recognition and accolades to her credit as she’s earned, Cécile McLorin Salvant, at 32, has a critical reputation beyond her years. Aside from her vocal gift for phrasing and an unmatched richness, quality, and range of voice, the jazz world would be hard-pressed to find a vocalist who is stretching themselves more, artistically, to explore musical horizons. The category of simply “jazz singer” or “jazz artist,” as for many other musicians, is not a description of Salvant’s work. But instead, in her own words, she is defined by an instinct for experimentation. In a recent interview with The Guardian, she shared her personal thoughts: “I’m interested in bringing things from disparate sources, time periods and techniques… I love to go into different sounds and different textures with just voice alone.”

Her foundation as a musician began early, growing up in Miami, Florida and she began studying classical piano at age five; her powerful vocal abilities gave her an opportunity to begin singing in the Miami Choral Society when she was just eight. She followed her musical ear and direction in classical voice and began studying with private instructors and a notable vocal instructor, Edward Walker, at the University of Miami. But, Salvant credits her family environment for her initial exposure to jazz, being surrounded by a variety of different origins and culturally diverse music. “I was lucky enough to grow up in a house where we listened to all kinds of music. We listened to Haitian, hip hop, soul, classical jazz, gospel and Cuban music, to name a few…I think jazz was just a part of it.”

Moving to Aix-en-Provence, France in 2007, Salvant would professionally develop her technical voice at Darius Milhaud Conservatory, studying improvisation, instrumental and vocal repertoire. Her success as a premier vocalist, outside of her enormous natural talent, was a product of intense commitment early on to instruction and dedicated practice. As stated by a jazz critic in The Nation, journalist David Hajdu relates, “a major element of her success in this taxing discipline is her unfailing technical proficiency…she has superb intonation and can hit a note dead on. She also understands the greater wisdom in varying her pitch for expressive purpose with superb breath control and command of dynamics.” She also effortlessly creates mood, as exemplified in her intimate style of live performance, where she can draw the audience into the moment or phrase by lowering her voice to a whisper or suddenly belt out the phrase with full lung power.

In 2010, Salvant released her first recording, the self-titled Cécile, and Jean-Francois Bonnel Paris Quintet (self-released, 2010). Bonnel had been her teacher and mentor while studying baroque music and jazz in Aix-en-Provence and she credits him with demanding dedication. “He just pushed me every day.” Within that same year, at 21, she would win the highly coveted Thelonious Monk International Jazz Vocals Competition, which included a recording contract with Mack Avenue Records.

Her first release with Mack, WomanChild (Mack Avenue Records, 2013) would be highly acclaimed as a debut to a widening audience and recognized as an important introduction to a new jazz voice interpreter. Receiving nominations for Best Vocal Jazz Album Grammy and Top Vocal Album in the NPR Music Jazz Critics Poll 2014, Salvant was being acknowledged for a vocal sound that was already sophisticated, adventurous, and refined.

Following up with One to Love in 2015, (Mack Avenue Records), Salvant would seek out both themes of female independence and romantic love, with a small core jazz group including pianist Aaron Diehl, bassist Paul Sikvie, and drummer Lawrence Leathers. Music critic Matt Collar of AllMusic reviewed it with high marks, calling it “a series of virtuoso performances, each one seemingly more engaging and emotionally resonant than the last. Conceptually centered around notions of romantic love…the album finds Salvant further demonstrating the poetic compositional skills and feminist themes that helps (this album) be much more than just a solid release from an accomplished jazz vocalist.” She would go on to earn her first (of many) multiple awards for a single release, receiving both Grammy Award for Best Jazz Vocal Album (2016) and Top Vocal Album from NPR Music Jazz Critics Poll (2015).

Salvant’s 2016 release Dreams and Daggers (Mack Avenue Records) won her a second Grammy Award for Best Jazz Vocal Album in 2018, as well as the DownBeat Critics Poll for Best Jazz Album of the Year. Recorded live at New York’s renowned Village Vanguard, incorporating blues into her live repertoire, Salvant brings her intimacy and delicate phrasing and alternating brazen pitch to some well-established standards of the American Songbook. Also introducing original material on this live set, she successfully manages the flow of compositions, as observed by music critic Shannon J. Effinger of Pitchfork, “to juxtapose newer compositions against the Great American Songbook is indeed a high-wire act, especially when jazz standards continue to outsell newer works…thankfully, we are now seeing the resurgence of artists who are pushing the boundaries of how jazz can evolve and still have great relevance.” All major critic reviews of this double album point to her themes of personal and contemporary romance and love, as a modern jazz vocalist and artist re-imagining and taking-on past standards and casting a more modern dialogue.

Invited to tour with the Jazz at Lincoln Center Orchestra, under musical director and legendary trumpeter, arranger, composer, and jazz scholar Wynton Marsalis, she received a very high compliment. Marsalis was quoted as saying, “You get a singer like this once in a generation or two.”

In 2018, Salvant would produce a large ensemble piece, Ogresse, an ambitious multimedia project exploring race and gender. Salvant wrote, composed, and sang multiple parts of the fable, backed by a 13-piece ensemble directed by the brilliant jazz composer, arranger, and orchestral band leader Darcy James Argue. Its premiere at the New York Metropolitan Museum of Art was extremely well received by attending audiences and critics alike, establishing another creative direction. Ostensibly a tale about a “ravenous black monster in the forest,” it then became a vehicle that Salvant uses for jazz variations and vocal interpretations. Argue, the conductor and arranger of the chamber orchestra, related his response to first hearing about Salvant’s project: “this dark and poignant and compelling fairy tale that she invented – amazing in a word.”

Salvant, again stepping out of her comfort zone as an interpreter of jazz standards, was taking a calculated risk. She received high praise from Argue: “what it looks like here is you’re conspiring to alienate your whole fan base…but she is a great artist and illustrator and busted out her Bach chops at soundcheck! She has an incredibly diverse and complete set of talents.” Salvant is now pursuing an animated adaptation from images she has drawn for the production of Ogresse.

With the onset of the Covid pandemic in ‘20/’21, all of Salvant’s international bookings and scheduled performances were canceled. Later in 2020, she landed both a MacArthur Foundation “genius grant” ($625,000) and a Doris Duke Artist award (worth up to $275,000) and in her own words, “freaked out” when she picked up the phone to receive the news. In a candid response to an interview with The Guardian (Guardian, Mon. March 7, 2022), she related her artistic appreciation. “It felt like a validation of the way I think. That’s a huge compliment. It’s the greatest honor.” According to several jazz critics’ evaluations, both awards were influenced by the reception of Ogresse, for the independent nature and creative originality of the music and multimedia project and concept.

The unplanned additional time that Salvant found during the pandemic, as with many other jazz musicians, became a period of reflection and introspection. Amongst other activities, she returned to a love for reading. By her own account, she went diving into some of the weightiest novels from the European canon: Emily Bronte’s Wuthering Heights, George Elliot’s Middlemarch, Alexandre Dumas’ The Count of Monte Cristo, but was particularly moved by the theme of time, past and present, which she found in Marcel Proust’s In Search of Lost Time. It sparked a transistion to a musical idea. “I had been reading a few books that were really getting into the idea of longing and distance and grief and nostalgia – huge books that dealt with ideas of ghosts and memory.” (DownBeat, pg. 18, March 2022)

The title song Ghost Song (Nonesuch Records, 2022), though composed prior to the pandemic, was to help conceive her ideas for the whole recording. Salvant relates her muse in a feature article in DownBeat’s March 2022 edition, “The idea of dancing with a ghost, or a memory – I connect with that idea so much. To me, the domain of memory, of reminiscing, is a form of celebrating something that is not with you.”

The result is a series of incredibly intimate and particular voicings to each song. Salvant also brings an enormous atmosphere to each piece, particularly on Wuthering Heights, with the wind blowing in the background, as Salvant’s Gregorian chant comes out of nowhere. These are exquisite cuts from a fearless artist expressing love, forlornness, and a wide range of emotional moods.

Salvant cites legendary female vocalists Sarah Vaughn, Billie Holiday, Bessie Smith, and Betty Carter as her strongest influences in style, craft, and pitch. But Salvant never seems to be mimicking or copying, but instead rendering her own creative take on many jazz and American Songbook standards. And now, with her most recent creative projects, in particular, Ogresse and her latest recording, Ghost Song, there is an emergence of a wider palette for artistic exploration. The constant seeking out of different ways of musical expression, vocal or otherwise, is truly the sign of a gifted individual, not looking for a definition, but change.