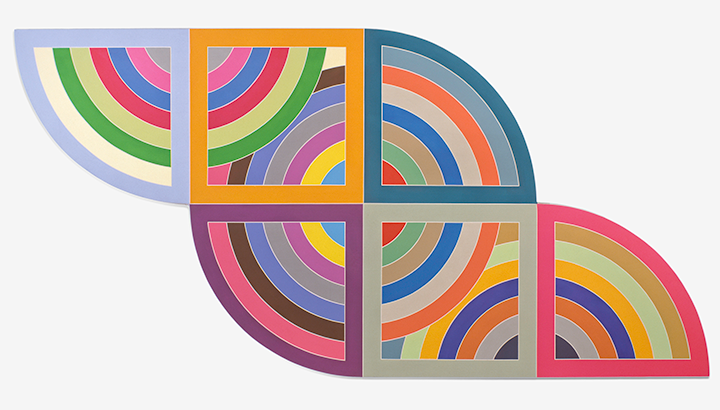 As Frank Stella turns 80 next year, a world — who knows him as the peerless modern painter,

may not know him, yet. But both will be amazed and knocked out visually, by some of the best-known,

groundbreaking and boldest works by this seminal artist of the 20th century.

major pieces by this fiercely individualist artist, as Stella stands out on his own — with still brash and

explosive 2 and 3 dimensional work, giving the museum public a well-deserved and overdue

retrospective. A 5-year production in the making, with over 95 works of art, from 26 different series,

spanning 6 decades, giving back serious attention to one of the contenders of modern art, represented

in this expansive retrospective that just opened October 30th.

As the center of Abstract Expressionism was occurring in NYC in the 1940s with Jackson Pollock,

and rebellious anti-figurative representations of art, Frank Stella would later, in the 1950s, step

out of this movement and start another (along with Jasper Johns, Ellsworth Kelly and Robert

Rauschenberg). What you see on these walls are pioneering and radical transitions, from the very

early period of Stella’s work, minimalist, with his Black Paintings and Black, Cooper and Aluminum

series, with parallel stripes and darkness, and emerging layers, as the eye adjusts to a new approach

— namely East Broadway (1958) and later a signature piece from the Irregular Polygon series,

Harran II (1967), that abandon the confinement of frames but break out into linear, protractor-like,

intersecting lines and curves, all with wonderful bright Day-Glo colors of Pop-Art. And then there are

urethane enamel, fluorescent alkyd and mixed materials that ushered in a whole muscular blast of

color and form — protruding out into the space of the viewer. The list of ingredients is part chemistry

lacquer, fluorescent alkyd, acrylic — inorganic and organic — et al, creating an explosion with all these

materials, that introduces a 3-dimensional effect that dazzles — as it juts out to you, off the canvas, no

longer contained as a flat surface.

Stella’s prolific production, also evidenced in his depth of approximately 26 series of 2 and 3

dimensional styles, evolving over his on-going career, speaks to his creativity, ideas and contribution.

Facing this challenge, Adam Weinberg — the Alice Pratt Brown Director of the Whitney and Scott

Rothkopf — the Whitney’s Deputy Director for Programs and Chief Curator, had to address how to

properly represent such a vast but important range of this seminal artist’s work. At the press preview,

on October 28th, Mr. Weinberg posed a question, almost as a challenge, “Why hasn’t someone done a

retrospective on Frank Stella?”… “It is a massive body of work… at least 4 generations of artists have

entered Frank’s work along with 6 decades of commitment.”

recognizable from all. The management of gallery size, attention to exhibit detail and impeccable

collage pieces of 10 feet by 10 feet, are testament to the museum putting to fantastic use the size and

of 2015, fronting a newly modernist building with glass and grey aluminum design, architecturally

master teacher, Hans Hoffman, who would influence a whole school of Abstract Expressionism in NYC

in 1950s, to Stella’s intense drive throughout studio art classes at Princeton University, and his arrival

upon a blossoming art scene in NYC in 1958, surrounded by a hotbed of painters, artists, performers,

writers and musicians. Abstract Expressionist’s artwork was still the center of attention in galleries in

Greenwich Village and Soho. But Stella did not falter and remained in over-drive, first starting a studio

out of an old jewelry shop on the Lower East Side of Manhattan, in the bull’s eye of creative action. His

fierce personal and professional determination and individualism would see him make his mark.

Stella, from the very beginning, as stated in the Whitney press release, “began a profound engagement

with art making”, from minimalism pieces, multilayered, that force contrast to the eye, to geometrical

polygon visualizations that leave the boxed frame canvas behind, to mixed media 3 dimensional

projection assemblages that reaches out to you, and onto current work, incorporating entanglements of

sculptured bent tubing, stainless steel and aluminum with fiber, that provoke and poke you with their

reflected by the Whitney Museum of American Art’s Chief Curator Scott Rothkopf, “this is an artist who

is not or has never been on auto-pilot.”

that the Whitney Museum of American Art offers you to fully appreciate the magnitude, range and

power of Stella’s work. As one of the most influential modern artists of our time who, as re-emphasized

by Rothkopf, “avoided at all costs, an easy or elegant solution” to his work or direction in art — it will

not leave you in neutral

Come find and explore these provocative paintings and take on the artist’s own words, “There are two

Don’t miss this chance to see the birth and breadth of this seminal modern artist’s work. ∎ 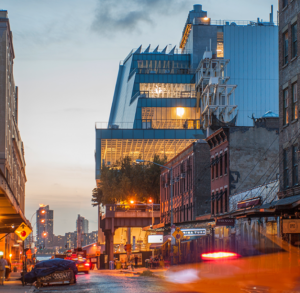