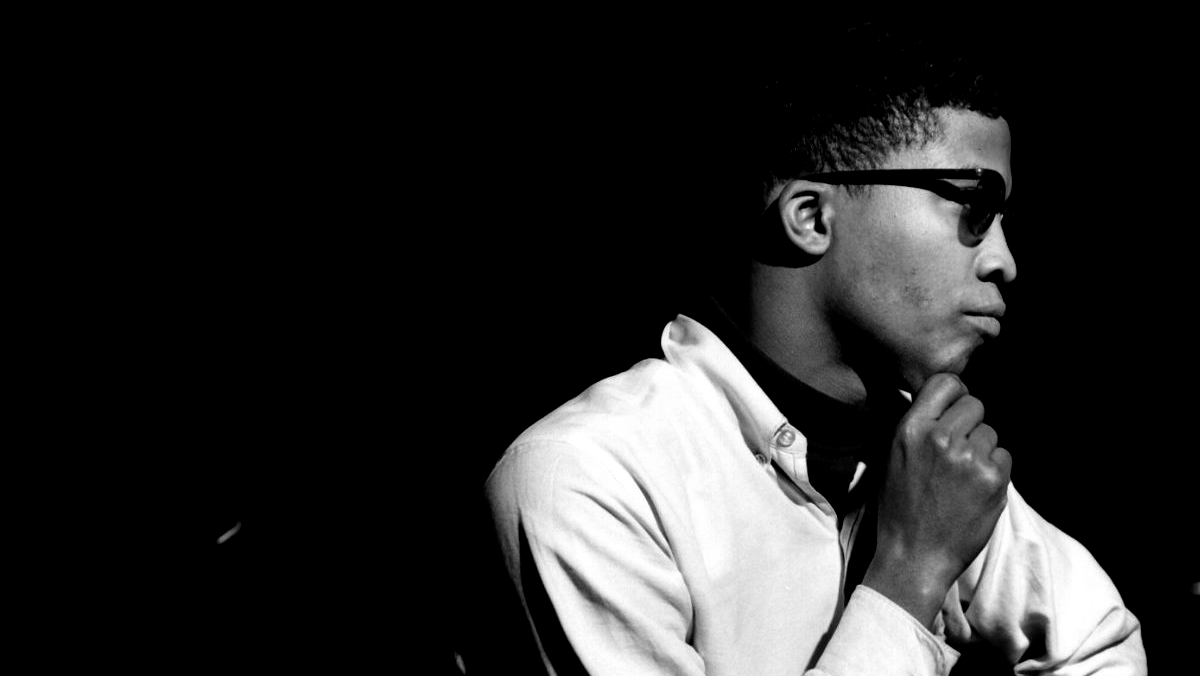 Early in his musical career, Hancock followed a seemingly unbroken trajectory through some of the most seminal explorers of jazz. He would play with, be influenced by, and have his musical boundaries pushed by mentors Donald Byrd, Clare Fischer, Eric Dolphy, Coleman Hawkins, and Miles Davis.

His holistic approach to music, in all incarnations, allowed for major breakthroughs in incorporating varied elements of jazz with all other categories of music, in his quest to “unlock the doors to endless landscapes and sonic journeys.” Beyond the legendary musicianship, compositions, and recordings and later mastery of musical electronic technology, Hancock holds to a defining personal philosophy that, in his own words, states “rather than getting out with the old and in with the new – I’m collaging one experience into the next. My golden rule is – keep doing the unexpected.”

Born in Chicago in 1940, Hancock would begin studying classical piano at the age of seven, exhibiting the gifts of a child prodigy. At 11, he played the first movement of Mozart’s Piano Concerto No. 26 with the Chicago Symphony Orchestra. Later attending Grinnell College, he would switch directions from his electrical engineering focus to majoring in music, graduating with a degree in music composition in 1960. He would then transition from a formal education in music and step into the depths of post-bop jazz innovations with the leaders of this movement.

In 1962, just after arriving in New York City, Hancock would receive a call to tour with avant-garde saxophonist and bandleader Eric Dolphy, who was at the forefront of experimental “free jazz.” As he discussed in a renowned Harvard University lecture series.

Hancock states that Dolphy allowed him to “break some of the rules of melody, harmony, and rhythm” that he might normally use in playing – “and it opened new paths for me to explore. And it unlocked ideas and techniques I continue to use today.”

Though the highly experimental often discordant and “not fully formed” compositions that Dolphy performed were not well received by audiences during the 1962/63 tour, Hancock recalls, “some boos, some walked out – but I knew deep down there was honestly in what we were playing – no finger-snapping compositions, but we were musical astronauts.” The live recording of Dolphy’s “The Illinois Concert” in 1963, an unknown discovery until 1999, with Hancock on piano (and bassist Eddie Kahn and drummer J.C. Moses), is now a vital contribution to avant-garde “free jazz” history and roundly praised by jazz critics. Hancock realized at that point in his developing career that taking musical chances, away from the mainstream, would be his direction going forward: “I had to defend not only the right to explore but the value of our exploration.”

Miles Davis would seek out Hancock by reputation to join his Second Great Quintet in ‘63-‘68, becoming Hancock’s self-proclaimed “greatest mentor” – and “a rulebreaker who chose wisely.” This musical period with Davis’ quartet, consisting of Ron Carter on bass and a 17-year-old Tony Williams on drums, and later Wayne Shorter on tenor saxophone, would continue to pursue a “free jazz” form, referred to by Davis as “time-no changes.” In Hancock’s own words, he had found a mentor who wanted the creative process to be spontaneous but staying within boundaries, “not surrendering entirely to experimentation. Using an approach to allow for all five musicians to contribute simultaneously, not always soloing separately.” Hancock explains the performance process Davis developed: “one musician would start, and other musicians would add notes, building – a response to real feelings–part of the story and raw energy we built.”

During this same period, Hancock would record several albums of his own including My Point of View (1963), Speak Like a Child (1968) and The Prisoner (1969), which would incorporate similar experimentation that Davis had pursued with The Second Great Quartet from 1964 to 1968.

In particular, Maiden Voyage (1966) would become a seminal release, establishing Hancock’s reputation early in his career as an individual and unique jazz interpreter, adding new approaches to modern jazz composition. The Penguin Guide to Jazz designated the album as part of its Core Collection with a four-star rating, calling it “a colossal achievement from a man still 24 years old.” Stephen Thomas Erlewine of AllMusic.com described the album as “arguably his finest album of the 1960s, reaching a perfect balance between accessible lyrical jazz and chance-taking hard-bop.”

From a technological standpoint, Hancock would begin his fascination with electronic instruments and later, the beginnings of synthesized music, with Davis introducing him to an early Fender Rhodes electronic keyboard. In the Harvard lecture series titled “Innovations and New Technologies”

Hancock recalls walking into a practice session for the recording of Miles in the Sky (1968) with Davis’ quartet and not seeing an acoustic piano. “I asked Miles, ‘what do you want me to play?’, and he pointed to this platform keyboard that looked like a toy.” This would be the initiation and start of a lifelong deep engagement in electronic media and instrumentation.

In his next major musical phase, Hancock would delve into more avant-garde electronic sounds in Crossings (1972) and then Headhunters (1973), which would not only be an enormous commercial success for Hancock, selling a million albums but cross over to funk and rock audiences, mixing with some jazz-rock fusion overtones. His further exploration into musical technology would also be fully featured with the use of synthesized instrumentation. Particularly with the Headhunter hits “Chameleon” and “Watermelon Man,” Hancock would not only employ his Fender Rhodes electric piano to substantial effect but also include the clavinet, ARP Odyssey, and ARP Soloist on the album, taking a bigger step into a musical direction leading to his “invention of novel musical processes.”

Headhunter also represented major genre-jumping from Post-Bop and experimental free jazz, to compositions anchored in the heavy rhythm of funk and mix of rock. “Hancock was inspired by the raw power he saw in James Brown and Sly & the Family Stone,” stated Pitchfork music critic Jeremy Larson, “Hancock wanted to quit wafting in the rarified air of acoustic and avant-garde jazz.” “I was not trying to make a jazz record,” Hancock said later. Larson adds, “He wanted to get low, down to the floor, through the earth.”

In the 1980s Hancock would continue to mix jazz inflections with the rise of disco and pop, beginning with Sunlight (1978), singing through a synthesized vocoder, and earning a chart-topping single, “I Thought It Was You.” With the advent of MTV giving instant multimedia music and video TV exposure to many artists, Hancock’s Future Shock (1983) would further establish his experimentation with electro-funk and an early example of Hip-Hop. A million-album seller, with the smash hit “Rockit,” Future Shock would reach an enormous audience, winning several MTV Awards and a Grammy for Best R&B Performance.

The 1990s started with a reflective collaboration of appreciation for his mentor Miles Davis. A Tribute Miles (1984) was recorded with the original lineup for Davis’ The Second Great Quintet (Wayne Shorter, Ron Carter, and Tony Williams), winning a Grammy for Best Group Album. Again, the chameleon was to change musical course, incorporating elements of funk, soul, hip-hop, jazz, and disco with 1995’s Dis Is da Drum, moved more towards acid jazz, but with a sincere message, “meant to raise awareness of the AIDS epidemic,” winning Time magazine’s Album of the Year honorific. Additionally, with a stellar cast including John Scofield, Jack DeJohnette, and Michael Brecker, amongst other artists, Hancock interpreted pop songs by the Beatles, Nirvana, Peter Gabriel, Prince, and others on The New Standard (1995).

Successfully revisiting his “electronica” period with an all-star cast, Hancock reunited with bassist, producer, and “center of the underground New York City music scene” Bill Laswell and, accompanied by the turntablist, Rob Swift of The X-Ecutioners. His release Future2Future (2001) would again add his own unique imprint as a change agent for contemporary world music. As stated by AllMusic critic Rob Theakston, “we are watching one of the greats in jazz music redefine himself with the times once again.”

Hancock would tour extensively in the U.S. and Europe through 2000-2010, supporting a variety of projects and musical directions, including a quartet exploring ambient music to straight jazz, to ethnic African-based music. During this period, he employed the use of the synthesized keytar, an instrument just like a keyboard synthesizer on a traditional stand, but it is tied to a strap and worn like a guitar. Always seeking to express musical sounds through evolving technology, Hancock would remain at the forefront of possibilities for new instrumentation.

His collaboration with Canadian folksinger/songwriter Joni Mitchell would produce River: The Joni Letters (2007), a poetic and instrumental jazzy tribute to her work, earning the 2007 Grammy for Album of the Year. This was a singular distinction at this time, as this was only the second time a jazz album had received the top Grammy award. Hancock delivered a subtle touch to Mitchell’s compositions, as reviewed by Tom Moon of NPR, as the artist “demonstrates he doesn’t radically overhaul Mitchell’s songs — instead, he gently opens them up and lures the singers into fascinating free-associative conversations.”

With so many collaborations for his ever-changing tastes in jazz mixing with other genres, Hancock’s vision of this journey is captured exceptionally well in Doug Biro’s 2006 documentary Herbie Hancock: Possibilities. Also released as a duet album in 2005, Possibilities was nominated for several Grammy awards and received wide critical praise. For this creative sojourn, Hancock takes on as many musical directions as can be imagined. Recorded in studios around the world, these fresh interpretations of standards and lesser-known compositions offer different melody, harmony and rhythm arcs, time signature changes, and spontaneous expressions from a wide variety of contemporary-period musicians (including Christina Aguilera, Sting, Trey Anastasio, Jonny Lang, Paul Simon, Annie Lenox, and Carlos Santana). Referring to the documentary title, Possibilities, Hancock states, “the word captures the spirit of what I believe and hope to achieve…as children we have that openness – but the older we get, the more closed in we get. The more frightened we get – afraid of the unknown.”

In addition to being a legendary jazz master and trailblazer into a vast array of musical genres and technologies, Hancock has been articulating his musical knowledge, experience, and philosophy through academic and educational endeavors. In 2014, he presented a 5-part Harvard University lecture series on jazz (watch it here). He has also established The Herbie Hancock Institute of Jazz (originally the Thelonious Monk Jazz Institute) which offers a full scholarship jazz performance graduate-level college program and provides jazz education programs in public schools throughout the U.S. and worldwide. Additionally, Hancock has instructional online courses available through masterclass.com. These endeavors speak again to the venturesome and humanity-driven nature of his character and also a desire to always be exploring and sharing musically and seeking knowledge. “ I think risk-taking is a great adventure. And life should be full of adventures.”

Even with all the testaments of achievement, accolades, and awards, including 14 Grammys, an Honorary Doctor of Music from Berklee College of Music in 1986, NEA Jazz Master in 2004, 2013 Kennedy Center Honor Award for the performing arts, and more, Hancock doesn’t see his recognition as a defining accomplishment. As a practicing Nichiren Buddhist since 1972, Hancock succinctly expresses his own view of himself and the world around him: “music serves a purpose beyond myself. Being a musician is something I do – not what I am. I’m interested in improving my life as a servant to humanity. I also realize that’s the purpose of my music.”